This“freebie” is a VBScript to check web sites (URL’s)that you have written or are responsible for. The full program isa much more comprehensive application. Ideally this program runsin the background only raising the alarm when the web site isunavailable or incredibly slow.

The“freebie” writes the data to a CSV (Comma SeparatedVariable) file for later analysis. MS Excel can do this analysisand reporting. Any other piece of reporting software, such asCrystal Reports could also be used. The full program sends thedata to a MySQL database, which is then displayed on my web site.

The script can beedited in Notepad to change the web sites that are checked.Simply copy and paste the urls into the quotation marks. As it isa ‘script’ you can muck it up quite easily and replaceit from my web site.

By takingreadings on regular basis, such as every half-hour, you canobserve any regular network hold-ups that occur during the 24hours. The VBScript version can do this if you attach it to theMS Windows scheduler. Simply go to the ‘scheduledtasks’ icon in the Control Panel and double-click it. Add atask and enter the path to the script. Set the advanced settingsto run every 30 minutes or hour. Don’t forget to‘run’ the task to prove that it will work later.

If you run thescript, you will see that a file called“CheckedURLs.csv” has appeared in the same folder. Thisfile contains the data collected from the program.

Why did I do this?

Some weeks ago, Itried to access a site called www.noseweek.co.za. The browserfailed with a completely blank page. I first thought thatNoseweek had gone out of business. So I did a search on Googleand found several links. One of these was the company that hadwritten the Noseweek web site. I went to their site and found alink to noseweek.co.za on their ‘front page’, whichalso didn’t work. As I had no contact details for Noseweek,I couldn’t phone them to tell them that their page was down.So I phoned the company, who were a bit surprised at the report.They said that they don’t check their web sites on a regularbasis. Apparently from my enquiries later, this is typical of theindustry as most write the web pages, charge for them anddisappear into the night.

The script shouldwork on all MS Windows platforms from Windows 95 to Windows XPwithout problems. If you have any problems with the programplease email me at ‘john_brock AT telkomsa DOT net’.Please be as thorough as you possibly can in trying out thescript.

I am stillworking on the “full model” as there is so much morethe program can do to establish what has made the web sitedisappear. A simple ping won’t do, as several serversdon’t respond to the ICMP protocol any more. Remember the“ping of death” that afflicted NT servers a while back?But a “Trace Route” can show up a lot of otherproblems.

I was uncertainwhat to call this ‘useful’ piece of software.“WebWacker” sounded too much like a “weedwacker”. WebSiteChecker is probably a good enough name.WebChecker seemed the most appropriate. Though "URLchecker" would also do. It doesn’t matter, it works. That’sall that counts. 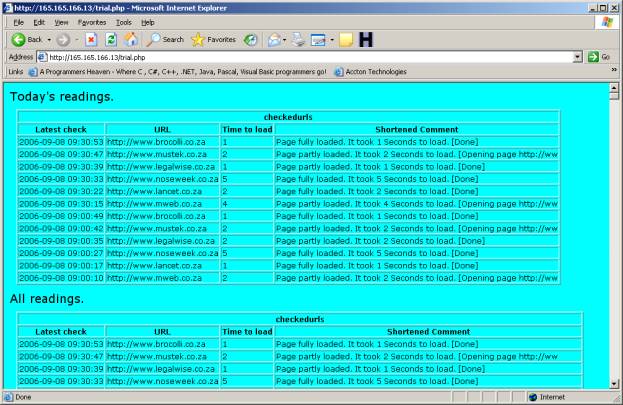 Typical display of the data from theMySQL database. 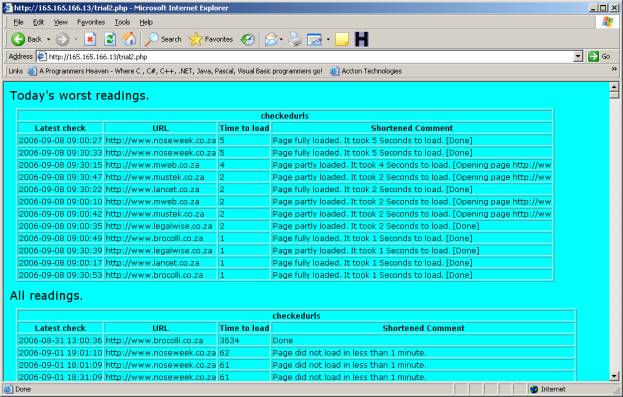 The “worst of times” – timetaken to load a page

These pages areoff my ‘prototype’ web site. The data has been storedin a MySQL database, which is queried from the Apache 2 webserver and displayed using PHP. The database resides on a linuxbox with the web server residing on a MS Windows 2000 machine.

A Picturemay give rise to a thousand words

Here is a chartof one particular site, taken from the data stored in the MySQLdatabase. It has been charted by a small application I wrote. (Excelcan also do this and then save the complete workbook as an HTML web page.)Of course the whole process can be automated using my application. It provides adaily/weekly/monthly report for inspection on this web site.

Updates to software and Internet ExplorerMicrosoft have probably tried to download IE7 to your pc several times over the last month. Beware IE7 breaks many scripts and removes functionality from the Internet Explorer object model. My script will NOT work with IE7. I may modify it to work later but I am not promising.

If you are looking for a change that won’t interfere with your Internet browsing experience, try FireFox. It doesn’t require a new operating system and works quickly and reliably on older hardware. It also works on Linux with X Windows without major problems.