SPRING “La Primavera” 2021 YL CERTIFICATE EVENT
Dates: 13 – 22 September, 2021
Hosts: The Radio Club La Rioja (LU1SF) & Log de Argentina (LdA),
All ladies (yl) who wish to participate are invited to submit their contact details and to make this an Amateur Radio on-air-party.
IMPORTANT – The registration form is “ONLY” for women who wish to participate by awarding their contact to other stations.
Registration closes 6 September, 2021 for ALL participants
Registration link: https://logdeargentina.com.ar/wp/?page_id=5070
Entrants todate: Argentinas: 45 Other: 22
Digital Certificates in celebration of Spring Day will be awarded. 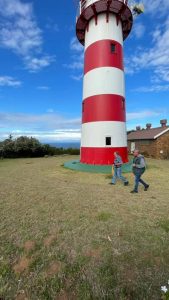 Around-and-About
3 operators from the West Rand ARC, drove 650 kms from their homes near Johannesburg, to the Greenpoint Lighthouse at Clansthal on the east coast of South Africa for the International Lighthouse Lightship Weekend (ILLW ), an annual event held every August. Your editor (Heather ZS5YH) only had to travel about 20 kms to meet YL Veronica Kotze, ZR6TVK. for the first time. It seems Veronica, her om ZS6JJK Jack and Nic ZR6AEZ, enjoyed their winter break and may have started a new tradition for their club. Hope to see them again. (below) Beach near lighthouse (top-right) Veronica’s pictures. 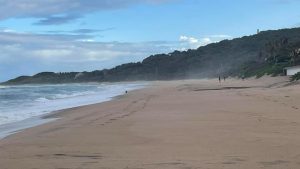 ****
Jaana Hirsjärvi OH6AX / OH0MYL – yl from Finland activated Tankar Lighthouse during
the International Lighthouse Lightship Weekend (ILLW ) August 21-22, 2021.
Tankar Lighthouse is located on the island of Tankar in the Bothnian Bay on the west coast of Finland, near to the Port of Kokkola. https://illwtankar.webnode.fi/kuvat-photos/
****
Elvira, IV3FSG from Italy, active from Uganda as 5X3R during August 13 to September 2, 2021. QRV on HF bands. QSL via IK2DUW, Club Log, HRDLOG.
****
German yl Tina, DL5YL and Fred, DL5YM will be active from Masescha, Liechtenstein during September 5-28, 2021. QRV on 160-6m with focus on 20 & 30m for Asia and Oceania.
****
Jeanne Socrates VE0JS (English yl who sailed solo around the world) currently travelling around in Australia, has been granted a new visa for twelve months – until 30 Aug 2022. She hopes to have finished her book before then – and for travel restrictions to be eased everywhere.
**** 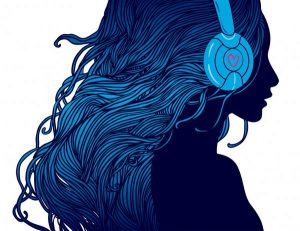 INTERNATIONAL YL SPECIAL DIPLOMA
The “Special YL Diploma” organized by the Spanish Magazine “Selvamar Noticias” and the Radio Club Yankee Lima Chile (CE4YLC) was held for the first time August 16 – 22, 2021. The objective of this unique and exclusive Diploma was to highlight amateur radio ladies.
Although similar to other events there were differences, the first of which was that the activating stations were solely and exclusively YL (female). It was a great success with 51 women awarding contacts around the World from countries as diverse as: Austria, Argentina, Brazil, Chile, and India. IARU Modes and bands used: HF, VHF, FT8 / FT4, PSK, and Echolink.
One of the modes that attracted the most attention was ECHOLINK. The reasons for this were a large number of activators and the many conference links available; both from Spain and Latin America – at least 10 echolink Conferences were connected 24/7.
Activation by 15 Countries confirmed and more than 5,000 contacts were made.
Among the 51 activators there were 3 very young operators, Rocío “Piojito” LU2HRG, 10 years old, Catalina “Cata” CD1CQY, 15 and María José “Cote” CD1MJF, 11 years old. Despite their youth, they showed they were able to handle high traffic situations with the same skill as an adult. These 3 only obtained their licenses recently. They are the new generation of radio amateurs and they show us, with their joy and enthusiasm for communications, that amateur radio is far from disappearing and is a fun hobby. We send our most sincere congratulations to these 3 little GIANTS of Latin American amateur radio.
ENGLISH – Selvamar Noticias – Publicación Nº 19 septiembre 2021.pdf
selvamarnoticias@gmail.com
*****

The first and second weekend of October brings us the Oceania DX Contests, firstly
the SSB, and then the CW version. This is a great contest, where they all want to contact you, instead of
having to break in, and it is often busy. Catherine VK7GH

2021 Oceania DX Contest New awards for YLs
The Oceania DX Contest will be held on 2/3 October for phone and October 9/10 for CW
between 0600z Saturday and 0600z Sunday.
The aim of the contest is to promote HF contacts with stations in the Oceania region, i.e., 9M6, DU, KH6, VK, ZL, YB, Pacific islands and all other Oceania entities.
See the full rules at Rules (oceaniadxcontest.com)
This year ALARA (Australian Ladies Amateur Radio Association) is sponsoring two awards for YLs for the first time.
The Florence McKenzie (Mrs Mac) Award is for the YL (“young lady”) Single Operator entrant from inside Oceania with the highest combined score in the Phone and CW sections.
The Austine Henry YL Award is for the YL Single Operator entrant from outside Oceania (i.e. the rest of the world) with the highest combined score in the Phone and CW sections
These awards recognise two women who have made significant contributions to amateur radio in Australia. Florence McKenzie is the first known licenced lady amateur in Australia. She established the Women’s Emergency Signal Corps to provide a morse code training facility and became known as Mrs Mac. Austine Henry was first licenced in 1930. She constructed her own transmitters, for which she won prizes. She was a member of the RSGB, NZART, ARRL, and a foundation member of YASME. You can read more about them on the Oceania DX Contest website.
Please promote this contest to your members to encourage more activity from YLs on the air.
They just need to exchange signal reports and a serial number starting at 001.
Make sure they tick the YL box when they put in their entry to make sure they are eligible for the new award. 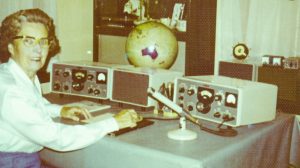 Austine Henry (nee Marshall) VK3YL.
An Australian lady amateur who became well known world wide, was Austine Henry (nee Marshall) VK3YL. She was born, Mary Austine, on 11th June 1913, in Brighton, Victoria. Austine received her first radio (a crystal set) as a small child, and promptly pulled it apart to see how it worked! She later graduated to building valve sets.
Tutored by her then boyfriend, later husband, Bill Henry, Austine passed her experimental licence exam and was issued with an Amateur Operator’s Certificate of Proficiency number 619, dated May 14th 1930, and the callsign VK3YL. Only the third woman to obtain an amateur licence in Australia at that time, she became a very active VK3 operator and a great ambassador for amateur radio world-wide.
Austine continued to build much of her own equipment, including a very large, high-power, crystal controlled transmitter, which won first prize in its class at the Victorian Wireless Institute of Australia’s public display in the Melbourne Lower Town Hall in 1933.
On September 6th 1933 Austine became the first woman admitted to the Royal Australian Air force Wireless Reserve and was enrolled as No.R.20 A.C.2 Marshall M.A. in the Wireless Section. She was very upset that they would not send her to the war zone as a radio operator, just because she was a woman! Despite her official commitments during WWII, she spent a lot of her spare time at the WIA, on a voluntary basis, teaching Morse code to service personnel and others.
Austine was a member of the WIA for 54 years (in 1985), having the distinction of holding the longest YL membership to that date. Other notable achievements included, being a foundation member of the YASME Foundation and winning certificate no.7 in the prestigious YASME Award. She was made a Life member of the Society of Wireless Pioneers, and her entry into the DXCC Honour Roll was as the first Australian YL using CW. She was the first to gain the WAC-YL and certificate number 22 for the YL-DXCC from Canada (hand printed in gold) and the first VK YL to gain the Australian Ladies Amateur Radio Association (ALARA) award. Austine became a member of the ARRL on April 14th 1930, had over 30 years of membership in the RSGB, and other organisations to which she belonged included, New Zealand Amateur Radio Transmitters (NZART), Radio Amateur Old Timers’ Club (Australia), RAOTC (USA), Young Ladies Relay League (YLRL USA), Young Ladies International SSB net (YLISSB), Women Amateur Radio Operators (WARO NZ) and of course ALARA.
Austine died unexpectedly, at the age of 81, on September 9th 1994; the words “Silent Key” being most fitting for this internationally known YL ambassador.
(2021-6-14 ALARA Column A.R. Issue 4 – Jen VK3WQ) 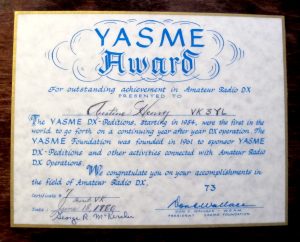 Florence Violet McKenzie OBE (nee Wallace) A2GA/VK2FV/VK2GA
Probably the best known lady amateur operator in Australia is Florence McKenzie (nee Wallace). Born in 1891, she became Australia’s first tertiary educated female electrical engineer, and opened a wireless/electrical shop in Royal Arcade Sydney in 1921. In 1925, Florence obtained her amateur licence and the callsign A2GA in 1925, our first known licenced lady amateur.
During 1922 Florence was involved with starting the Wireless Weekly magazine, along with three other people. This magazine later morphed into Radio and Hobbies and later still, Electronics Australia. The 1948 call book lists her as VK2FV which lapsed about 1959. Regaining interest in amateur radio in 1979, Florence again became 2GA, this time VK2GA, which she held until her death in 1982. In the mid 1930s Florence established the Electrical Association for Women which appears to have been formed mainly to teach women how to use electrical appliances in the home; she also wrote a cookery book for electric stoves, when none were available.
When Florence realised that war was imminent, “Mrs. Mac” as she was fondly known, became acutely aware of the need for radio communications as part of our defence, and the need for people trained in Morse code. She established a no-charge training school in a loft near her shop. Her students were initially, predominantly women and the school became known as the Women’s Emergency Signaling Corps. (W.E.S.C.) During 1940, in response to a newspaper advertisement by the Navy, appealing for trained amateurs to enlist as telegraphists, she offered her trainees. The Naval Director of Signals and Communications recommended to the Naval Board that they be employed at shore establishments and fourteen selected applicants took up their duties at the Harman Wireless Station in Canberra. From this beginning the Women’s Royal Australian Naval Service (WRANS) was established in 1941. It grew to a peak of 105 officers and 2,518 ratings during the war.
Mrs. Mac trained the women to teach the thousands of men who wanted a skill to offer the Services. She could also see that if there were women in the services, who were competent in communication, it would free the men for other duties. In her valedictory published in Ditty Box, the ex WRANS magazine for June 1982, she was reported as being “eventually responsible for training more than 12000 servicemen”! American servicemen who were based in Australia were sent to Mrs. Mac for refresher courses. Initially skeptical, they were soon won over by her training methods. Continuing after the war, she trained many QANTAS pilots in Morse code.
Florence McKenzie was awarded an OBE in 1950 and became a SK in 1982.
(2021-6-14 ALARA Column A.R. Issue 4 – Jen VK3WQ) 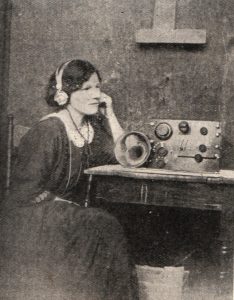 Where are the YL’s. Are you looking for YL nets?
You can find YLs on UHF, VHF, DMR, HF and Echolink.
Find a list of YL Nets at https://ylharmonics.com/wp-content/uploads/2020/05/YLNets.pdf

Unsubscribe: If you do not wish to receive this newsletter, please email zs6ye.yl@gmail.com 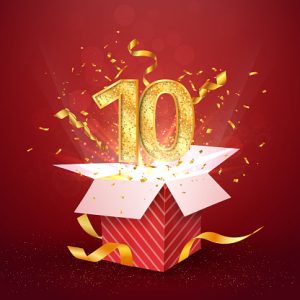 View all of admin's posts.