2 mins read
I don’t usually blow my own trumpet. I usually use somebody else’s But I can’t keep this to myself.
The low pass filter works and works well. Of course it helps to have an LC meter to measure the coils. A bit tricky for the ones less than a microhenry but it does give a close approximation.
It also helps to be able to “sweep” the filter when finished. This I did with an HP spectrum analyser and tracking generator. In the ‘old days’ [last century] I would plot the response on a XY plotter. To send it out to others would need photo copying. Now I use the phone’s camera.
Of course I forgot the impedance is 200 Ohms not 50 Ohms. So the first test showed up the mistake. After making two resistor matching sections I got the desired result. 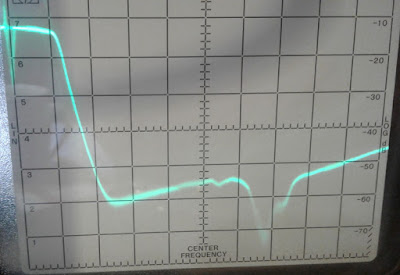 It should look a lot better but the loss of the matching sections modifies the overall loss. However it shows at least 40dB suppression for the second and third harmonics. It will do the job.
The ‘test’ construction isn’t very ‘pretty’. But that also works. The coils are wound on the plastic outside of a ball point pen. It doesn’t matter that it is not perfectly round. Nor does the gauge of the wire matter very much. So long as it is ‘close’ to the specified gauge. 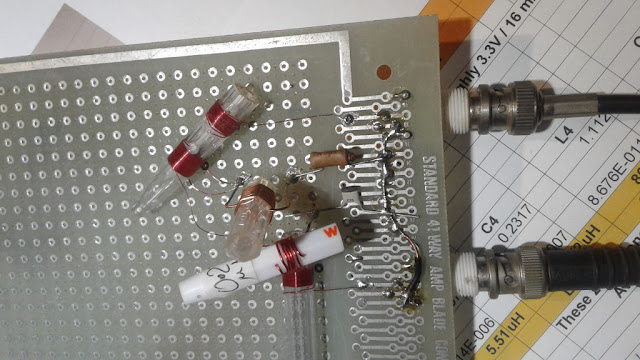 The spreadsheet will be available on my web site later. It allows for any characteristic impedance. Or any cut-off frequency with the ratios of frequency to the cut off frequency. A sample is shown below:- 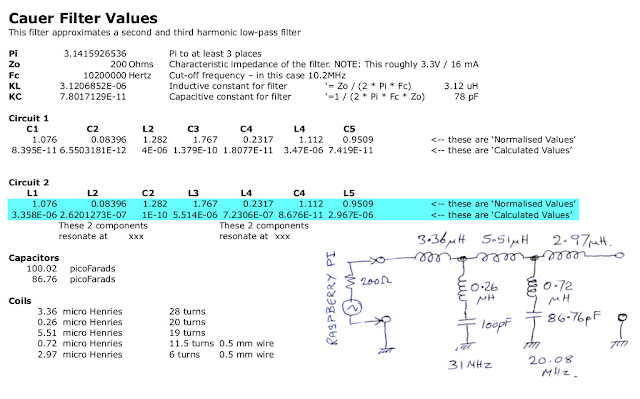